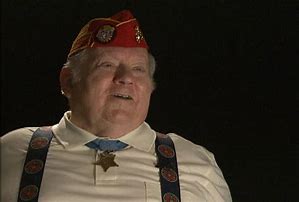 Jack Lucas, who at 14 lied his way into military service during World War II and became the youngest Marine to receive the Medal of Honor, died Thursday in a Hattiesburg hospital. He was 80. Lucas had been battling cancer and died shortly after midnight after he requested doctors remove a dialysis machine, his wife, Ruby, told The Associated Press. Jacklyn "Jack" Lucas was just six days past his 17th birthday in February 1945 when his heroism at Iwo Jima earned him the nation's highest military honor. He'd used his body to shield three fellow squad members from two grenades, and was nearly killed when one exploded. "A couple of grenades rolled into the trench," Lucas said in an Associated Press interview shortly before he received the medal from President Truman in October 1945. "I hollered to my pals to get out and did a Superman dive at the grenades. I wasn't a Superman after I got hit. I let out one helluva scream when that thing went off." Lucas was left with more than 250 pieces of shrapnel in his body and every major organ, including six pieces in his brain and two in his heart, and endured 26 surgeries in the following months. He often showed the curious his arms, which were speckled with grenade fragments that could be seen just under the surface of his skin. He was the youngest serviceman to receive the Medal of Honor in any conflict other than the Civil War. "By his inspiring action and valiant spirit of self-sacrifice, he not only protected his comrades from certain injury or possible death but also enabled them to rout the Japanese patrol and continue the advance," the Medal of Honor citation said. In the AP interview, written as a first-person account under his name, he recalled the months he spent in a hospital. "Soon as I rest up, I imagine I'll run for president," the story concluded. "Ain't I the hero, though?" Lucas became a symbol of patriotism in the decades after the war, meeting presidents and traveling the world to speak with frontline soldiers and fellow veterans. Marine Corps Gunnery Sgt. Will Price was shaken by the news of Lucas' death. Price remembered the response to a rousing speech Lucas gave at Marine Corps headquarters in Washington. "I never met anyone like Jack Lucas," he said. "When he came the Marines just crowded around him. He's the epitome of the values of the Corps. They were just captivated by him. Everything that came out of his mouth was pure gold and pure motivation." Big for his age and eager to serve, Lucas forged his mother's signature on an enlistment waiver and joined the Marines at 14. Military censors discovered his age through a letter to his 15-year-old girlfriend. "They had him driving a truck in Hawaii because his age was discovered and they threatened to send him home," said D.K. Drum, who wrote Lucas' story in the 2006 book "Indestructible." "He said if they sent him home, he would just join the Army and give the Army the benefit of his good Marine training." Lucas eventually stowed away aboard a Navy ship headed for combat in the Pacific Ocean. He turned himself in to avoid being listed as a deserter and volunteered to fight. "They did not know his age. He didn't give it up and they didn't ask," Drum said. Born in Plymouth, N.C., on Feb. 14, 1928, Lucas was a 13-year-old cadet captain in a military academy when the Japanese bombed Pearl Harbor. "I would not settle for watching from the sidelines when the United States was in such desperate need of support from its citizens," Lucas said in "Indestructible." "Everyone was needed to do his part and I could not do mine by remaining in North Carolina." After the war, Lucas earned a business degree from High Point University in North Carolina and raised, processed and sold beef in the Washington, D.C., area. In the 1960s he joined the Army and became a paratrooper, Drum said, to conquer his fear of heights. On a training jump, both of his parachutes failed. She said Lucas credited his stocky build and a last-second roll as he hit the ground for saving his life. "He was the last one out of the airplane and the first one on the ground," Drum said. Cancer was the one enemy Lucas couldn't defeat and the disease "tore apart his body," Ruby Lucas said. He was diagnosed with a form of leukemia in April and spent his last days in the hospital with family and friends standing vigil. In his final hours, the steady stream of visitors was stopped and Ruby Lucas was given a few quiet moments with her husband. "I said, 'Jack, you know you're dying,' " Ruby Lucas said. He just raised his head off the pillow. He said, 'I ain't dead yet.' Just as plain as day. I said, 'That's Jack Lucas. He wants to get the last word in.' "